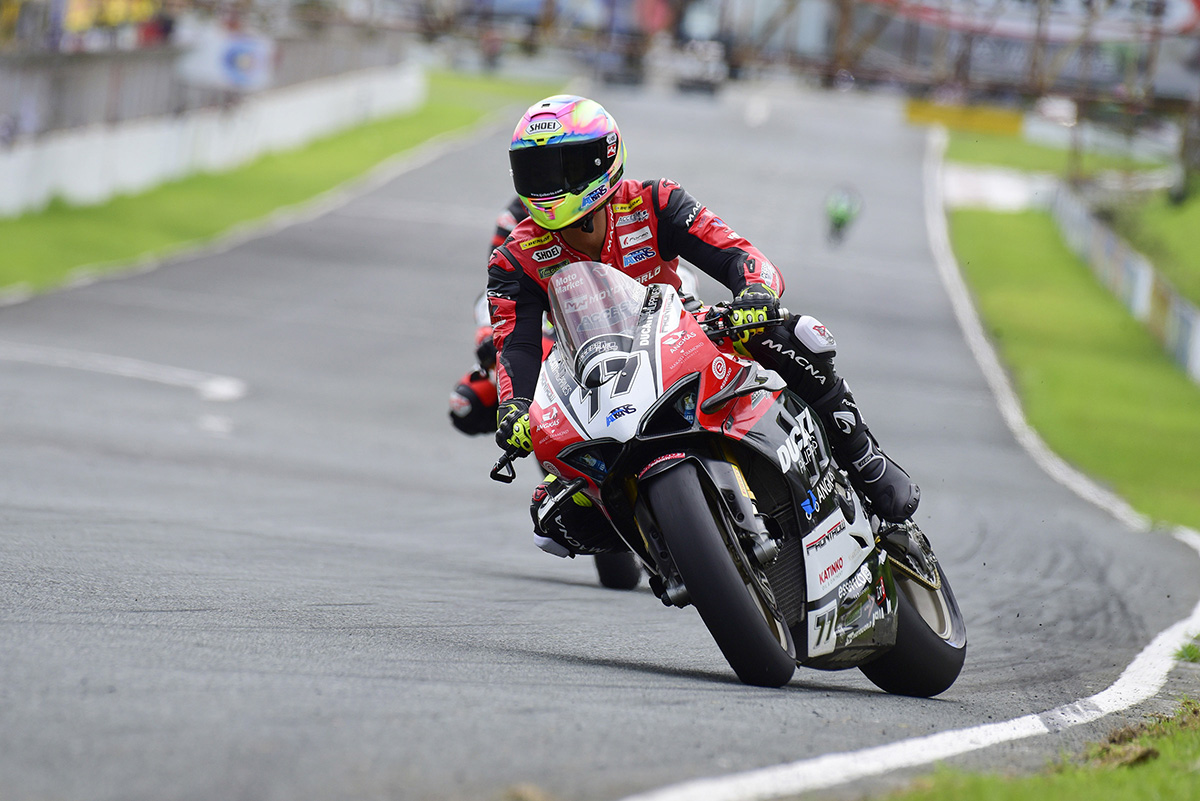 The Philippine Superbike Championship’s (PSBK) return to the Batangas Racing Circuit (BRC) was a fresh challenge for Access Plus Racing. For a team that was so dominant in Clark last season, it was a relearning experience for both bike and rider to race on a track they haven’t visited in 2 years. It actually required a lot of hard work and a bit of luck to come out with a race win and 3 podium finishes from Round 2 of the 2022 season.

Timothy Joseph “TJ” Alberto gradually increased his pace as he got reacquainted with the 3.700 km course. Finding the right setup on this #77 Ducati Panigale V4 was also key to finding a good lap around BRC that later allowed him to set the 2nd fastest time in Qualifying. His teammate Lawrence Macalinao likewise had to build on his confidence to improve on his time and ended the session in 4th ahead of all the other Intermediate Class riders.

Alberto got a clean getaway at the start of Race 1, but was hounded by his closest championship rival Marvin Mangulabnan on the BMW. The two were nose-to-tail for the most of the 11 lap race with the Ducati rider soaking up the pressure. His consistency and race craft was later rewarded with 1st place, while setting his personal best lap in BRC in the process. Macalinao also had his hands full as he fought for position with RG Romero. Their battle would go down all the way to the chequered flag with the Ducati rider missing out on a class win by a mere 0.028 secs across the line.

Race 2 saw another lighting quick start from Alberto that propelled him far into the lead. However, it was short lived as a tire issue caused him to lose control on lap 2. With luck on his side, Alberto was able to stay on his bike and rejoin in P3. He was now faced with the difficult task of chasing the lead pack with a degrading rear tire. Despite the risk, he managed to claw back 2nd where he would finish. Macalinao, on the other hand, had a disastrous start. His stalled his #26 Ducati V4 on the grid and dropped down to last. But giving up was never an option. He put his head down and made it as high as 5th overall and score another 2nd place in the Intermediate Class.

The 2022 Philippine Superbike Championship will be back at the Batangas Racing Circuit after a month on August 6-7. Hosting back-to-back rounds on the same track allows Access Plus Racing to further hone their bikes and riders and improve on their performance as the season hits its halfway point.

TJ Alberto, #77:
“Good to have added points to the championship. Winning the first race and setting my personal best lap was the highlight of the weekend. However, the tire issue in Race 2 made the bike really hard to control and just lucky I didn’t crash. Still, catching up from that far back to finish 2nd was a good way to wrap up the weekend and maintain the points lead.”

TJ on Twitter
What a race weekend! Extended the points lead again ✅ #PSBK #Superbike #Ducati #racing #motorsportRead all about it ⬇️https://t.co/BSuvQDljkJ https://t.co/zmIYbk8YB5