Sixth & Seventh For TJ Alberto After Strides In Sepang 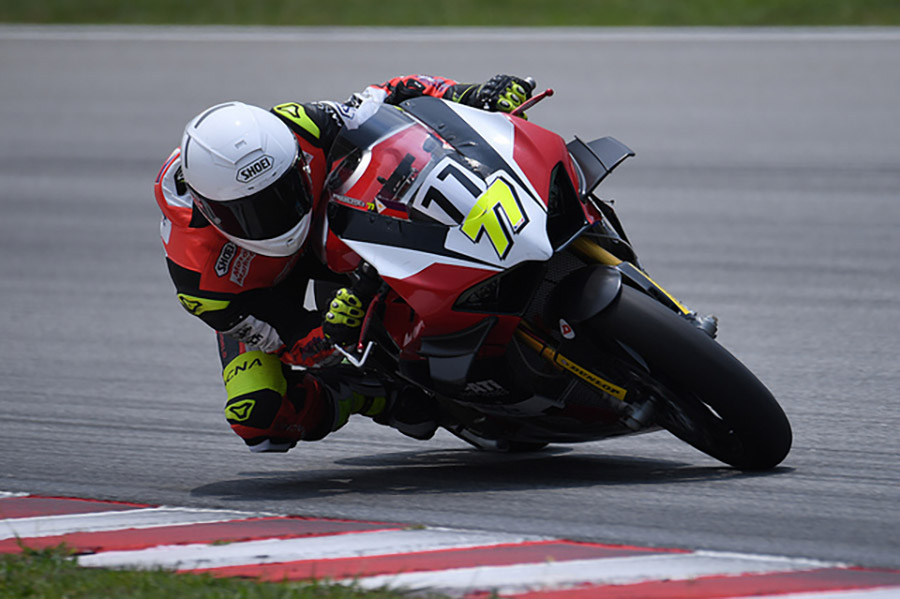 TJ Alberto kickstarted his ASB1000 campaign in style after claiming seventh and sixth places in the opening two races of the season at the Sepang International Circuit.

Several days after the #77 rider debuted the all new Ducati Panigale V4 in the official tests he was back on track at the Malaysian track, the home of the Malaysian MotoGP, where he put in two impressive performances in the weekend’s two eleven lap races, firstly in the dry and then in wet conditions.

The next round of the all new ASB1000 series is scheduled to take place at The Bend Motorsport Complex in Australia in mid-April.

TJ Alberto:
‘In the first race of the Asia Road Racing Championship here in Sepang, Malaysia I finished seventh, gaining a few spots from my ninth place in qualifying. I’m quite happy with this result as I struggled during the two-day pre-season test to break the top ten, so it was a welcome result to gain a few spots. We have a lot still to improve with the bike, but the team did a great job for this first race. Race Two was very wet with a tropical monsoon fast approaching. We went out on the sighting lap and the track was quite dry but once we stopped on the grid a strong downpour was unleashed. I did my best to keep the bike on two wheels to score points for the championship. In the end we finished sixth with a last lap overtake at the line. It was a good experience to try the bike and Dunlop tyres which new to me for the first time in the rain. I’m looking forward to the next races now that I have more laps under my belt in the wet and the dry. Thanks to my team Access Plus Racing Ducati Philippines Essenza for providing me with a great bike for this race. The team is all new to the Asian championship and we are still in a learning process. But the positive points from this first week in Malaysia is that we have started well and can only improve from here. I’m looking forward to the next race at the Bend in Australia!’